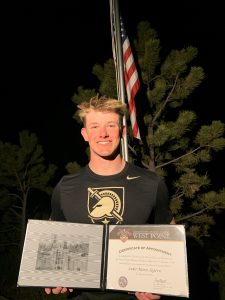 Senator Mike Rounds announced the three principal nominees for the U.S. Service Academies for the 2022-2023 school year. Among those three, is Stevens High School Senior, Luke Jegeris who is the principal nominee to the United States Military Academy at West Point. Luke is the son of Karl and Jill Jegeris. He holds a 4.14 GPA, is a team captain of the varsity football team and a catcher for Post 22 baseball. Luke is also involved in Raiders Respect Club, National Honor Society and the Economics Club. In addition, he participates in numerous types of volunteer service, including mission trips to Tijuana, Mexico and snow removal at his church.

Congratulations Luke! We wish you the best of luck!