In late April, approximately 35 volunteers, many of which were former, current and, future Rapid City Stevens Raider students, gathered to plant 20 fruit trees at the Tom Pfeifle Trails at Raider Park. The park was selected to receive 20 fruit trees from the Rapid City Urban Orchard Project last month. The Rapid City Urban Orchard Project started nearly five years ago with 100 trees and a simple idea: provide fresh fruit to the community for free. Since the first tree was planted by Skye Lawlor and his father, Brett, the apple trees have produced hundreds of pounds of apples. 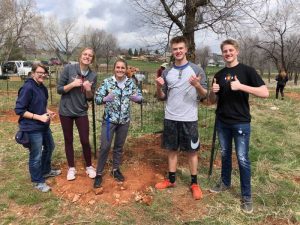 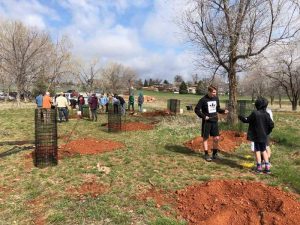 The trees will further enhance the 38 acres of public-school land across from Stevens High School that is being developed for exercise and academic use by students and staff. Stevens math teachers Tom Keck and Seth Keene are leading that work and much of the funding to develop the park has come through a non-profit formed and led by friends of the family and supported through the Tom Pfeifle 5k run.

Last month’s planting was the first in the future orchard for the park. Keene and Keck are hoping to make more progress at the site soon by securing the area from vehicular traffic. After that is completed, work on the biking and running trails will begin. A master plan has been completed for the site and each element included in the design of the park will be dovetailed into the classrooms at Stevens High School.